As an Amazon Associate I earn from qualifying purchases.
When you buy via the links on my site, I may earn an affiliate commission at no cost to you. Learn more.

Cosmetics: Methylisothiazolinone The Ingredient You Should Be Wary Of 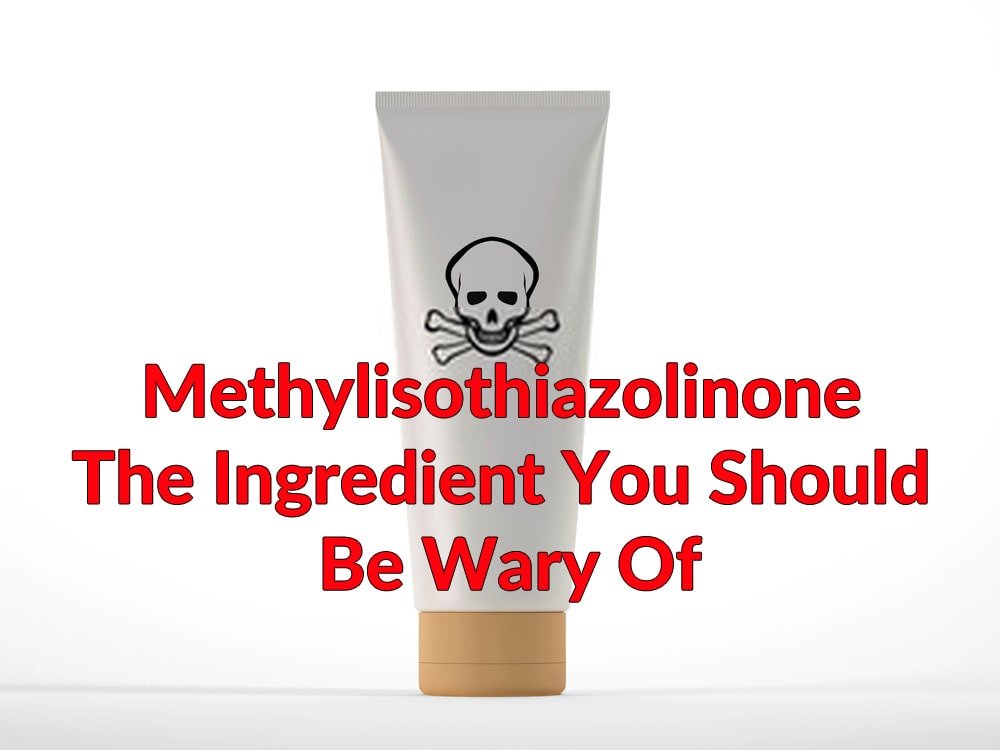 Although its name is difficult to pronounce, methylisothiazolinone has become very common in hygiene and beauty products.

Why? Simply because it is the trendy conservative, the one who officially replaced parabens. The problem is, it’s not really better.

In fact, it may even be worse… I suggest taking stock at the situation in order to avoid using this ingredient.

From methylisothiazolinone to reality

Methylisothiazolinone, commonly referred to as “MIT or MI”, has gained a strange reputation.

Already in 2013, French dermatologists publicly decried this ingredient as one of the most likely to cause skin irritation.

Not only is it together with its “fellows” (ingredients that end in “-isothiazolinone”) very irritating, but some studies even attribute neurotoxic effects to them.

Scientists have conducted laboratory research on rat brains. They found that brief exposure to methylisothiazolinone caused damage to nerve cells but also to vision cells [1].

Despite these warning signs, methylisothiazolinone is present in several so-called “rinsed-off” products, such as shampoos, shower gels and washing gels.

I even found it in a baby washing gel that said it was “very soft”.

But what exactly is MIT?

In the preservative family, methylisothiazolinone is a powerful biocidal agent. It is capable of killing harmful microorganisms in a product or limiting their proliferation.

Contrary to what one might think, it is not new.

It just came back in force when manufacturers looked for alternatives to parabens, which are too easily identified on labels by health-conscious consumers.

In addition, MIT has surrounded itself with very close cousins, all the other “isothiazolinones”, who fulfil more or less the same functions, but also have the same harmful effects….

It is therefore difficult to identify its presence on the label among the complete list of ingredients.

Why is MIT used?

Cosmetics manufacturers will tell you: “Don’t panic, we use a very little amount of methylisothiazolinone.” Which is expressly recommended by the authorities, as this preservative has such an irritating potential.

And they will add, “It is used in rinse-off products… You will agree that it is important to find a conservation method for cosmetics that contain a lot of water. As parabens are no longer welcome, the MIT is essential. It is not too expensive and very effective. »

However, my question has been the same for several years: why not use other softer and less controversial preservatives?

Because there are a few: they have been used for several years by certified organic or natural brands.

But they are more expensive and a little more complex to formulate.

If you have other alternatives to avoid controversial ingredients, share them here with us.

This site uses Akismet to reduce spam. Learn how your comment data is processed.

Best Microdermabrasion Machines
Best Microdermabrasion Creams & Scrubs
Best Led Therapy Devices
Best Organic Skin Care Products
Best Winter Creams
We use cookies on our website to give you the most relevant experience by remembering your preferences and repeat visits. By clicking “Accept All”, you consent to the use of ALL the cookies. However, you may visit "Cookie Settings" to provide a controlled consent.
Cookie SettingsAccept All
Manage consent

This website uses cookies to improve your experience while you navigate through the website. Out of these, the cookies that are categorized as necessary are stored on your browser as they are essential for the working of basic functionalities of the website. We also use third-party cookies that help us analyze and understand how you use this website. These cookies will be stored in your browser only with your consent. You also have the option to opt-out of these cookies. But opting out of some of these cookies may affect your browsing experience.
Necessary Always Enabled
Necessary cookies are absolutely essential for the website to function properly. These cookies ensure basic functionalities and security features of the website, anonymously.
Functional
Functional cookies help to perform certain functionalities like sharing the content of the website on social media platforms, collect feedbacks, and other third-party features.
Performance
Performance cookies are used to understand and analyze the key performance indexes of the website which helps in delivering a better user experience for the visitors.
Analytics
Analytical cookies are used to understand how visitors interact with the website. These cookies help provide information on metrics the number of visitors, bounce rate, traffic source, etc.
Advertisement
Advertisement cookies are used to provide visitors with relevant ads and marketing campaigns. These cookies track visitors across websites and collect information to provide customized ads.
Others
Other uncategorized cookies are those that are being analyzed and have not been classified into a category as yet.
SAVE & ACCEPT
Go to mobile version